It’s not all beef in Calgary

Pop quiz: You’re headed to Calgary for a culinary weekend. What are you going to eat?

Beef, you say. Of course.

Well, not exactly. Sure, the west is known as the beef headquarters of Canada, and the first time I visited Calgary, I ate so much of Alberta’s acclaimed AAA beef that I’m pretty sure I cleaned out at least one cattle ranch entirely on my own.

But as it turns out, Alberta, and the city of Calgary in particular, is about a heck of a lot more than steak and burgers. Not only that, but it’s also home to some pretty damn good chefs, both established and up-and-coming.

And that is exactly why I ended up in Calgary earlier this year on a culinary weekend. In honour of Top Chef Canada (the season 3 finale took place in Calgary), a group of contest-winning Top Chef viewers and members of the media were invited out to sample the best of the best dishes in Calgary, all with a focus on local ingredients and slow food—and a mission to show that Alberta has a lot more than cattle on its menus.

Here are some of the favourites I found.

Here’s where you get to call me a big, fat liar, because while Briggs may boast plenty of dish options, its pièce de resistance is a big, fat piece of beef. A 48-ounce rib-eye, to be exact, served atop a wood platter and sliced into shareable pieces. It’s no doubt the menu item that gets the most attention (it’s hard to ignore a steak roughly the size of a brontosaurus rump being carried through the dining room), but I would argue it’s not the best (as the adage goes, bigger really doesn’t mean better). Oh sure, it’s delicious, but my kudos go to the unusual-but-delicious seared Pacific scallops doused in vanilla oil, the gooey-creamy lobster mac’n’cheese and the fall-off-the-bone pork belly served with sugary sweet maple glaze and apple slaw.

Oh, and then there are delectable little desserts like a rich, gooey chocolate crème pot and the more photogenic cinnamon wafers with berries and vanilla cream. And cool cocktails like the Barbara M (bourbon, strawberries, orange and rhubarb) and the Dark + Old Fashioned (rum and green chartreuse… wait, green chartreuse? Yes. And that’s a liquor that requires a bartender who knows what they’re doing).

Walk into Choklat at the right time and it feels like you’re stepping into a literal fog of chocolate. The boutique chocolate shop in the Inglewood neighbourhood is famous for roasting its own cocoa beans, and if you happen to arrive mid-roast, you’ll be greeted by a smoky, heady haze that blankets the entire store (and will leave you smelling like chocolate for the rest of the day).

Famous for its commitment to quality and aversion to mass production, Choklat makes all of its own chocolate (the only chocolatier in Canada to do so) and uses only all-natural ingredients. Customers can also custom-design their own truffles, made fresh-to-order on location.

If you go, splurge on the Porcelana 70% dark bar, which Choklat describes as the “Holy Grail” of the chocolate industry, only carried by two chocolatiers in the world: Choklat and Amedei, a luxury chocolate producer in Tuscany. And get a cup of drinking chocolate—I personally recommend the Orient Express, which is an intense, thick, creamy blast of chocolate and spice.

During the Calgary floods earlier this year, chef Michael Noble and his team at NOtaBLE stepped forward to supply meals to evacuees from the Bowness and Montgomery areas. That alone is reason enough to love this restaurant, but it also stole my stomach with incredibly delicious food and the kitchen’s star: a massive rotisserie grill.

When it comes to plates, the beef is fantastic (get the bison flank with cherry and walnut butter), but it was actually the seafood options that I really loved. The “daily catch” served with Panang curry, crushed edamame and bok choy is one of the tastiest things I’ve ever eaten (with the added bonus of not being too heavy), and among the appetizers, the East Coast scallops (served with grilled romaine hearts) are perfection. Other stars: crispy potato rolls filled with pork and jalapeño jack cheese served alongside salsa verde, the Dungeness crab and shrimp bake with spinach and aged cheddar, and the absolute must to end your meal: the award-winning Stilton cheesecake with rhubarb compote.

Pizza is one of those foods that no matter how many times I eat it, it still remains the ultimate in comfort food. And while to be honest, it’s a dish that’s hard to do wrong, it can also be hard to do incredibly well. I’m talking about going way beyond slapping some processed mozzarella and salty pepperoni on dough, and diving into pure, fresh ingredients cooked with care and creativity.

At Cibo, the pizza offerings are extensive, each one more creative—and tastier—than the next. I sampled about eight different flavours and couldn’t choose just one favourite (although I enjoyed trying—a group of us tagged almost every tweet that weekend with our own hashtag of #stretchypants). Pizzas are not just handcrafted, but hand-rotated in the oven as they cook to ensure the dough rises perfectly. Among my top recommended picks: the Pear, with gorgonzola, walnuts and honey; the Mushroom, with spinach, truffle oil and hazelnut; and the Prosciutto, with radicchio, arugula, carmelized onion and fig. Oh, and if you are in search of some of Alberta’s famed red meat, grab a Wild Boar Bacon pie.

This pub-meets-bowling alley does serve food, but I confess I didn’t try any of it. Rather, I headed to National for one thing: beer. National’s bar menu highlights local craft beers (always my number-one requirement when drinking in a new destination). There are lots of names that Easterners like me know well, such as Mill Street, Steamwhistle and Hop City, but there are also plenty of West Coast brews, like B.C.’s Tree and Calgary-based Big Rock. Plus, you can bowl while you drink local. Win-win.

In addition to a thriving restaurant scene, Calgary has a few foodie events happening in the city. And we’re talking way more than the deep-fried trend du jour offered at the annual Stampede. For something a little more refined, there is Slow Food Calgary’s annual Feast of Fields, which takes place in the garden behind Rouge restaurant.

Featuring sample-sized dishes from some of Calgary’s top restaurants, along with beer and wine from microbreweries and vineyards across Canada, the event basically enables you to tour the city’s food scene in one afternoon: lavender-honey chicken wings from The Cookbook Co. Cooks, lettuce wraps filled with pulled pork and mango chutney from Tango Bistro, chorizo with pesto and beet sauce from The Cafe Radio, and bison tartare from Market (yes, the obligatory red meat offering—hey, I only said it’s not all beef in Calgary, not that there’s no beef). 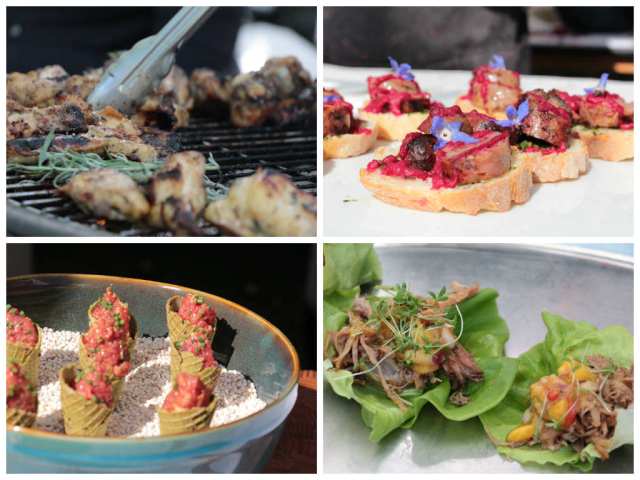 This past year also brought a new event to Calgary: The Really, Really Long Table. Held in honour of City Palate magazine’s 20th anniversary (although I’m hoping it will return in future years), it was exactly what it sounds like: a really, really long table, set up down a stretch of Stephen Avenue. It was fine dining meets community, as guests chatted with strangers seated next to them, like a ridiculously big family dinner. The food was a protein-heavy mix of plates from some of Calgary’s top restaurants, featuring fresh oysters from Catch & The Oyster Bar, pig’s head mortadella and bison heart kielbasa from Charcut Roast House, seared Albacore tuna with ratatouille and parmesan polenta from Blink, bacon-wrapped veal sweetbreads from The Belvedere and, my absolute favourite, elk and foie gras wellingtons with dried cherries from Trib Steakhouse.

And there you have it—proof that Calgary’s culinary scene is about so much more than red meat (although that’s certainly in there, too). And there are dozens of other delicious finds, like River Café (the ultimate date place), Ox and Angela (featuring Spanish tapas), Brava Bistro (with a monthly market-based prix-fixe menu) and Raw Bar at Hotel Arts (starring award-winning mixologists and, during the summer months, a way-too-happening-to-be-Calgary pool scene). You can even take a culinary tour of the city, customized to your tastes, with Calgary Food Tours. But if you go, just remember your #stretchypants.

I travelled to Calgary as part of a press trip with Tourism Calgary; however, all views expressed are entirely my own.

4 Comments on “It’s not all beef in Calgary”

New Year’s Day (evening), 2021.
Very happy @thenomadiceditor timed her move to Kitchener to coincide with (the admittedly 2020 version of) Oktoberfest. 😉 The physical distancing pods at @villagebiergarten were cozy, the beers from local brewer @blockthree were tasty and the afternoon wasn’t nearly long enough. Prosit! 🍺
Never underestimate the power of a few days in nature to reset yourself. (Beverage optional.)
It was supposed to be the @towomens_runs race this weekend, but, you know, covid. So, a virtural race. Was admittedly hard to push myself without the adrenaline that comes from a starting line and race crowds and cheer squads (hence a slower pace than I wanted — also, hot today!), but still grateful for the #womensetthepace community keeping me motivated to get out the door, solo. And for my first-ever virtual race medal (because it’s all about the bling 😉). #towomensruns #10k