Searching for mint in Cuba

The bartender shook his head sadly. “No mint,” he said.

I turned to my friend Erika in horror. Here we were in Cuba, home of the famed cocktail of rum, sugar, lime, soda and mint, and I was being denied. We had just arrived at our hotel in Veradero, and I wanted to christen the start of our vacation with the country’s national drink. Heck, I had been drooling at the thought of tasting an authentic Cuban mojito since our plane had taken off from Toronto.

Perhaps because it was late in the day, we reasoned. There’d be more mint tomorrow. But the next day, the same. And again the following day.

I was in the land of the mojito with no mojito.

I’m not sure when I became so enamoured with this drink, but as many of my friends can tell you, I tend to get a bit giddy when I find a good one. And for that reason, I think there was a method to the madness of being unable to find one at my resort; my taste buds were forced to hold out for the real, real thing at La Bodeguita del Medio in Old Havana, former hangout of writer Ernest Hemingway and unofficial birthplace of the mojito.

I say “unofficial” because the mojito allegedly traces back much further than La Bodeguita, to a 16th century drink called El Draque (named after Sir Francis Drake), which consisted of aguardiente (a prececessor of rum) mixed with sugar, lime and mint. In the mid-1800s, after the Bacardi company was established, rum replaced aguardiente and the modern version of the mojito was born.

But that’s just one theory. Others say its roots can be traced to African slaves working in Cuban sugarcane fields, who made a similar drink from guarapo (sugarcane juice).

No matter the theory, by the time La Bodeguita came into existence in the 1940s, the drink was already alive. La Bodeguita simply brought it into mainstream popularity, thanks in part to its famous patrons such as Nat King Cole, Marlene Dietrich and, of course, Ernest Hemingway.

I had been to Cuba twice before, but both times never made it to La Bodeguita. The first time, I stayed in Cayo Guillermo, which has one of the most beautiful beaches I have ever seen to this day, but is too far from Havana for a day trip. The second time, I stayed in Veradero (as I did this time), and while we did make a day trip into Havana, we didn’t have time to get in and grab a drink at the always-crowded but ultra-tiny bar.

This time though, no matter if I had to push my way through the throng and miss my bus back to the hotel, I was going to have my damn mojito.

But it wasn’t just the drink that drew me there (honestly). La Bodeguita is as famous for its drink as it is for Hemingway. It’s not that I’m such a fanatic Hemingway fan (although I do think Hills Like White Elephants is one of the greatest pieces of written dialogue), but I’ve always admired his talent. And as a writer, how could I not drink where he drank?

We pushed our way into the bar, which, once we were inside, was surprisingly empty (turns out most of the tourists were outside, taking pictures of the bar’s sign, rather than inside, enjoying the bar’s drinks). We performed the ritual that countless patrons have performed before us: we signed our names to the wall (the walls of La Bodeguita are covered in signatures of people passing through), and we eyed the Hemingway memorabilia, such as the famous sign that hangs above the bartender: “My mojito in La Bodeguita, My daiquiri in El Floridita,” scrawled and signed in Hemingway’s handwriting. Then Erika and I clinked glasses and, with great relish, sipped our authentic Cuban mojitos.

A few days later, back at our Veradero hotel, I spotted a bartender muddling mint leaves into a glass. Apparently, the mint supply had finally arrived. No matter, though. I had found my drink. And it was delicious. 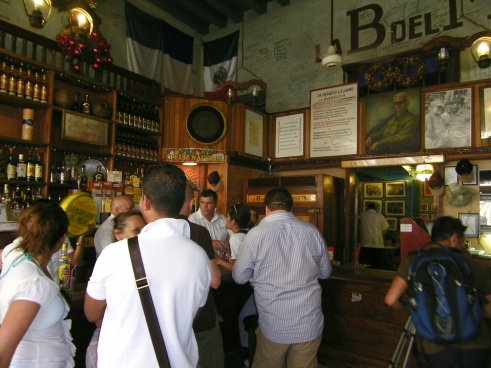 Inside the tiny bar of La Bodeguita 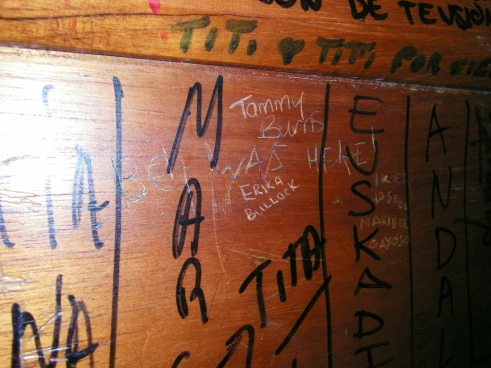 I’ve added my name to the thousands of signatures

← Playing with fire in Iceland, Part II: This way to hell
The Malecón: Havana’s sofa →

5 Comments on “Searching for mint in Cuba”