It all started 10 years ago. I was going through a rough time, a period of intense stress that had left me with a severe case of insomnia and—when I could finally sleep—nightmares.

My long-time friend and eternal voice of reason (and fellow mojito hunter) came to the rescue. Erika showed up at my house in downtown Toronto and told me and my roommate Shanna that she was whisking us away to her family’s cottage for the weekend, to kill off the negativity that had consumed us. We were to pack our bags with no worries for what awaited us back home, and head three hours north, to a patch of water near Pointe au Baril known as Harris Lake.

If you’re not from southern Ontario, it can be hard to understand the magical allure of a weekend “up north.” Toronto can be a non-stop place, with hectic schedules and long winters that make those few summer weekends a treasure to be cherished. People joke in Toronto that if you don’t have a cottage yourself, you have to find someone who does, so that, if even for just one weekend, you can escape. Ontario’s cottage country holds mythical powers, and Torontonians consider themselves lucky when they have access to that magic.

Erika’s cottage sits along the eastern shore of one of Harris Lake’s many small bays. It’s landlocked, which means you can only access it by boat, and as we bounced across the water that first time toward the cottage, perched atop a rocky ledge like a lookout point for the community, I could feel my stress and worries vanishing in the wind behind me.

For four days, I was out of my head and the urban chaos of Toronto, spending my mornings and afternoons in a horizontal position on the gently swaying dock, and my evenings washing down s’mores with glasses of red wine. When I came home, my stressors were still awaiting me, but they felt more manageable, and I finally felt recharged. Such is the power of Ontario’s cottage country to heal and rejuvenate.

That trip launched a tradition. We went again the following year, with a few more girls—all friends of ours from high school. And from there, the weekend’s fate was sealed, and we knew we couldn’t let a single summer pass without escaping together.

It’s a ritual that goes beyond our circle of friends. Because the cottage belongs to Erika’s family, our group includes not just friends, but grandmothers and a great grandmother, mothers and aunts, sisters, nieces and daughters (that is the only rule of the cottage weekend—it’s for the girls only). And they’ve all adopted us into a close-knit family of inside jokes, annual traditions and stories that get passed along from year-to-year—like the time my sister and I got our canoe trapped in a wind tunnel and had to be rescued, or the time Shanna and I learned to waterski and finally managed to get up, skimming across the lake’s surface for the briefest of seconds (and to the rousing applause of other cottagers watching the display) before crashing back into the water.

Some of the girls and me, many years ago

This year marked the 10th anniversary of our girls’ cottage weekend. A lot has happened in that time. We’ve seen new careers and new homes, marriages and breakups, births and deaths—all of it shared and spilled out, sometimes with tears, sometimes with laughter, over cocktails sipped on the dock and moonlight dips in the lake. There has been a lot of change—some good, some bad, some that we still have yet to discover. But we know that every third weekend of July, no matter how much in our lives has changed, some things will always stay the same. 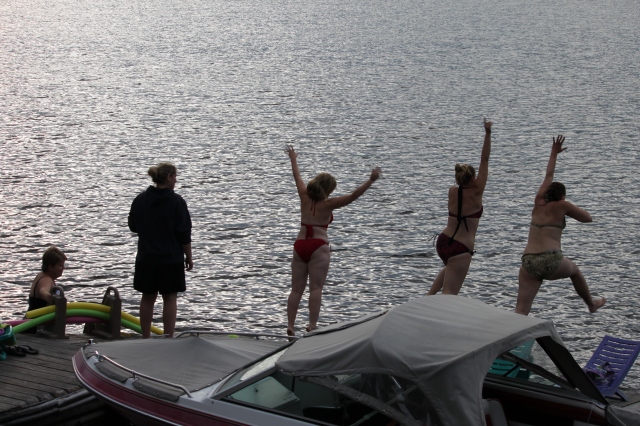 The girls and me, 10 years later

← Cuba libre: Why you shouldn’t dismiss Havana’s food scene
When the universe—and a friend—gives you Vietnam →

2 Comments on “No boys allowed: Girls’ getaway in cottage country”