It’s the palm trees that get you.

There are some things you expect to see in Ireland: rolling green hills, fields of sheep, rainbows with leprechauns at the end pouring pints of Guinness. But not palm trees.

And yet, in a little pocket of the northwest known as Sligo, you’ll find them. You’ll also find other things that seem out-of-place for the Emerald Isle, like a Kiwi surf instructor who came up from down under because the waves are just better in Ireland. And ancient sea fossils embedded in the sand, seemingly so many of them that you can barely put a foot down without landing on a piece of marine life that’s millions of years old. And stand-up paddleboard lessons, and chefs dedicated to organic foods, and musicians jamming in pubs and on the streets as evening falls (okay, that last one is totally what you expect to find in Ireland).

And that’s the reason behind a recent tourism campaign for this region, called #SligoWhoKnew. Because, really, Sligo County embodies everything you didn’t know about Ireland, and then some.

I arrived in Sligo feeling a bit disoriented. We had come in (“we” being me and my coworker Stacey) on a red-eye flight that saw us landing in Dublin looking and feeling like we were extras in a bad zombie flick. Several hours on a bus later, we arrived in Sligo Town, and somehow, despite reaching hour 24 of being awake, I suddenly felt very alive. (The whipping winds of a North Atlantic sea in September will do that to you.)

But it was more than the brisk air. There’s something almost magical about Ireland. It’s like the country breathes life into you. And that night and in the days ahead, we were teased with twists on traditional Irish culture, typical of the Sligo quirk we’d soon come to love.

We spent our first night at the Clarion Hotel Sligo, a beautiful, old stone building—the kind of fairy tale-like architecture you expect to find in Ireland. But it also holds an unexpected past: from the mid 1800s to 1992, the property was an asylum, specifically the St. Columbas Lunatic Asylum. It closed down in 1992 and remained abandoned for 10 years until the Clarion stepped in and bought the property. Information on the history of the asylum is noticeably sparse, even on the hotel’s own website, but we did hear whispered rumours of ghosts that roam the hallways and there’s an unmistakable eeriness hanging over the place (I am willing to admit that also may have just been the power of suggestion). But don’t get me wrong—the building’s mysterious past is actually part of the charm, and part of what makes it so appropriate for a place like Sligo. Because, well, see below.

The remains of an ancient wedge tomb at Streedagh Strand

Ireland is the kind of place that overwhelms you with history. From the dramatic ancient tales of vikings to the horrors of the Great Famine to the still-fresh memories of The Troubles, there is so much history packed into that little island. But in Sligo, as we chatted with locals and did a walking tour with maritime archaeologist Auriel Robinson of Seatrails (side note: coolest job title ever), we realized that the region’s history holds many secrets. Like how three ships from the ill-fated Spanish Armada remain sunken at Streedagh Strand, along the north coast of Sligo. Or how the rocks at Streedagh are littered with ancient fossils of sea life from millions of years ago. Or how wedge tombs dating back thousands of years can still be found scattered throughout the countryside, most of them facing west toward the setting sun over the cold, grey waters of the Atlantic.

Or like how Sligo is believed to be the home of the vampire—specifically, the home of Dracula. Researchers have suggested that Bram Stoker got some of his inspiration for Dracula from his mother’s tales of living in Sligo during a cholera epidemic, when bodies were tossed into mass graves, sometimes some still living along with the dead. Sligo Tourism even put on a Bram Stoker Experience event this year for Halloween to honour the connection.

Dining out in Ireland means battered fish, beef stews, potatoes and beer, right? Yes, but it’s not all there is, and I’m not just talking about fine dining restaurants in downtown Dublin. Even in tiny towns throughout Sligo, you can find twists on the traditional fare.

I declare the world’s greatest calamari lives at Shells Cafe

Our first night, we ate dinner by the water at Shells Cafe in Strandhill. A group of people were holding an impromptu jam session at a picnic table outside the door, while the sun set into the Atlantic just a few steps away. Meanwhile, inside, the cafe was warm and cozy, with an eclectic decor that makes you feel like you’re not sitting in a restaurant, but in a good friend’s kitchen. Plates of battered fresh fish filled our tables, paired with pretty salads and slices of homemade bread, all served up by owners Myles and Jane Lamberth, a couple who are “at home welcoming all the regulars into Shells and putting the world to rest over copious amounts of tea,” according to their website. (How can you not love a place with that as its mission?) Everything on the menu is prepared in-house, the herbs are grown in a garden in the back, the coffee is organic and fair trade, and the ingredients are locally sourced whenever possible. 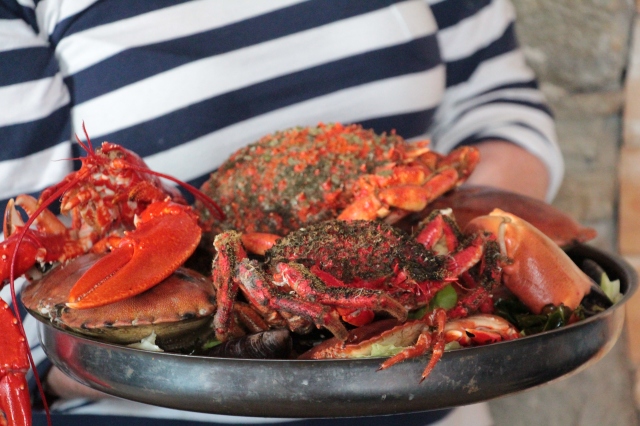 Shellfish extravaganza at Eithna’s by the Sea

The next afternoon, we sampled Eithna’s by the Sea in Mullaghmore, where the fish is fresh and all the produce is locally sourced and organic. Eithna O’Sullivan’s menu changes with the seasons, and is always unique, with treats like carrageen panna cotta and meringue with berries and sea spaghetti—and if you like the food (which, if you’re a fan of seafood, you will), the restaurant includes a store where patrons can buy ocean-inspired goodies to take home, like homemade seaweed pesto and dried carrageen moss (said to be the ultimate cure for flu season). What’s more is Eithna’s offers classes on marine life and Mullaghmore’s heritage, and hosts seminars on maintaining a healthy diet. This is a restaurant that’s healthy, delicious, eco-conscious and educational.

Of course, as is tradition in Ireland, we headed out in Sligo Town one night for an evening of live music and beer—really, the quintessential Irish experience. Except, rather than the pub scene you’d expect, we landed in a trendy lounge that featured cocktails and platters of gourmet appetizers (sadly, I’ve since heard that the lounge, Source Sligo, has closed indefinitely). Unexpectedly stylish and ridiculously busy, the place was packed with people and a line-up of wonderfully talented musicians, including the emcee for the night, Miles Graham (for whom I am now a slightly overly enthusiastic fan—so even though Source Sligo is no longer open, I’m still writing about it just so I can post this clip of Miles performing that night). You can also listen to the full song here.

So you could say Sligo is something like Bali meets Transylvania with a dash of California: romantic, dark, mysterious, mellow and almost tropical in mood (if not temperature). And yet, it is also like none of those places. It is pure Ireland—just not the Ireland you thought you knew.

I travelled to Sligo as part of a fam trip for the Wild Atlantic Way coastal drive with Failte Ireland and Tourism Ireland; however, all views expressed are entirely my own.